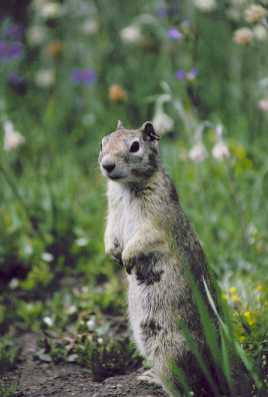 Captive juveniles, which were born and reared in the laboratory at SNARL and subsequently housed in outdoor enclosures, were more responsive to playbacks and remained alert longer than juveniles born and reared in the field. Manipulations of foraging pressure, population density, and post-emergent visual and auditory environments failed to replicate these response differences. However, emergent experiences before natal emergence (including differential auditory, visual and tactile stimulation) significantly affected later responses to playbacks, with captive-born juveniles more responsive than field-born juveniles even if they had identical post-emergent experiences. The selective advantage of this experiential priming is rapid development of appropriate responses and thus an increased chance of escaping from predators shortly after emergence, when juveniles are most susceptible to predation.

Finally, to optimize foraging and vigilance efforts, we would expect animals to adjust their behavior according to the current intensity of predation and the hunting styles of local predators. I conditioned animals to respond to a neutral conspecific vocalization as if it warned of an aerial predator, indicating that ground squirrels' response repertoires are indeed modifiable through experience. I recently extended these findings by showing that naïve animals can learn new associations between calls and appropriate responses indirectly, by observing 'knowledgeable' squirrels. Natural selection would favor flexible responses if it allowed juveniles, or prey at any age, to develop antipredator behaviors that are appropriate for the local predator environment. Cultural transmission of response styles may be a safer way of learning appropriate responses than trial-and-error learning.

Belding's ground squirrels have two distinct alarm calls (whistles and trills) which can alert other animals of approaching predators. For alarm calls to have communicative or adaptive value, recipients must be able to respond appropriately to the calls. Yet how young animals learn responses to various alarm calls has not been well studied, despite the obvious implications for survivorship during periods of high vulnerability to predators.

Pre-weaned pups' heart-rate responses to alarm-call playbacks indicate that pup can discriminate between their species' two alarm calls just prior to their natal emergence (20-24 d of age), most likely due to the acoustic characteristics of the calls. However, by examining the reactions of free-living juveniles (young-of-the-year) to playbacks of various calls, I found that they do not respond differently to the two calls when they first emerge aboveground, but instead learn the appropriate responses within the next five days. Response styles continue to change throughout the following four weeks, and approximate adult responses before juveniles disperse from their birthplace.

Exposure to alarm-call-experienced mothers is not essential for response-pattern development, but juveniles learn to discriminate among calls 1-2 d earlier if adults are present when juveniles begin to hear alarm calls. Fast learning may help juveniles avoid predators that target young squirrels. 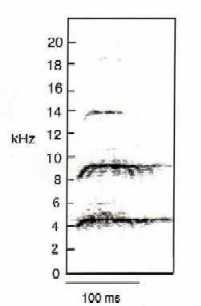 Spectrogram of a whistle alarm call, typically given to aerial predators

Spectrogram of a trill alarm call, typically given to
terrestrial predators

My long-term research interests emphasize the ecological correlates of sociality and the development of adaptations. In particular, I will explore how a species' physical environment (including its habitat features, predators and circannual rhythms) interacts with its social environment (such as the degree of coloniality, duration of maternal dependence during development and nature of social interactions with conspecifics) to generate adaptive behavior. I will use antipredator behavior as a bioassay of differential responses to physical and social environments. For example, habitat variation may result in response-repertoire differences within a species (e.g. due to variation in predator variety and numbers, openness of habitat). On the other hand, two sympatric species may differ in their response patterns despite similar predation threats if their alarm-call systems differ, if they exhibit different social systems or if they utilize different refuges.

I have recently developed an assay for non-invasive quantification of corticosteroid levels in ground squirrels, by analyzing fecal metabolites. With this measure I can examine population differences as a function of overall levels of stress as well as short-term hormonal responses to stressors, which have been shown to facilitate learning in some species. My preliminary studies suggest that corticosterone levels correspond with peak periods of learning of anti-predator behaviors by free-living juveniles, and that population differences in the hormone vary with predation pressures.