In addition to the projects listed above, in the future I hope to explore the following research topics:

- sexual selection and the effect of ecological differences on mating systems
- chemical ecology of social recognition
- self-referent phenotype matching and its role in nepotistic behaviors
- within-family relatedness and social bonds among humans
- MHC, kin recognition and social interactions, including mate choice and nepotism
- the role of bacteria and MHC in odor production
- mate choice and odors, including how odors convey information about reproductive status and health
- population differences in predation pressure and survival strategies

Much of my research is conducted in the eastern Sierra of California.

Most of my research focuses on Belding's ground squirrels (Urocitellus beldingi), a species found in mountainous areas of the western US. I do most of my research at a field site in Rock Creek Canyon, in the eastern Sierra, as well as at the Sierra Nevada Aquatic Research Laboratory (SNARL), near Mammoth Lakes, CA. My main site is an alpine meadow near Rock Creek Pack Station and Rock Creek Lodge. However, I study animals from several populations, including locations near Saddlebag Lake and Tioga Lake (near Yosemite National Park), Mono Lake (read descriptions of ecological and behavioral research in the lake basin), Mammoth Lakes Basin (see Forest Service Information) and sites within Rock Creek Canyon.

For example, I have studied the mechanisms of two functional behaviors: communication and anti-predator strategies (especially the role of stress on learning and modification of these behaviors) and recognition of kin (including the 'armpit effect'). Although the adaptive significance of these behaviors has been demonstrated, how they develop in young animals is usually unknown.

I also study how kin recognition facilitates the avoidance of inbreeding, observing mate choice among females and resulting paternity of their young. 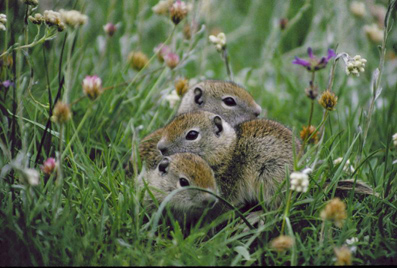 All images copyright of Jill Mateo